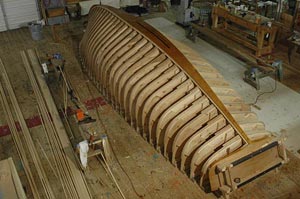 The 26′ Herreshoff Alerion Thetis is a replica of Nat Herreshoff’s personal boat Alerion III, which is on display in the Small Boat Shed at Mystic Seaport Museum. The Herreshoff method of construction was used to build the boat (i.e. a mold was built for every frame). The same meticulous eye for detail and concern for craftsmanship that has been characteristic of all the boats built at the Beetle Boat shop is evident in every phase of the Alerion.

Thetis was launched in Mattapoisett, MA on September 26, 2009 and was winner of the Best Professionally Built Sailboat at the 2010 Woodenboat Show. The boat was also featured in the 2011 Calendar of Wooden Boats by photographer Benjamin Mendlowitz, and at the 2012 Herreshoff Marine Museum Classic Yacht Symposium.